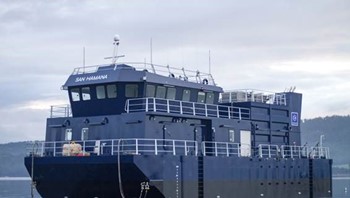 Sanford General Manager for Aquaculture Ted Culley said the barge is part of Sanford’s strategic plan to enhance operations on the salmon farm.

“This new barge is an asset upgrade and replaces the Kiwa, our existing 1960s-built barge, which will be retired and towed back to Bluff to be scrapped. With the amount of growth at Stewart Island, the new barge also assists Sanford’s vision to expand further out to sea in Southland.”

The barge named San Hāmana (hāmana meaning salmon in te reo) has a particular arrangement and had to be ordered to design, from a specialist marine construction company in Hobart, Australia where it took nine months to build.

The barge has four silos that can hold in total 200 tonnes of fish food, and a computer system that automatically puts the feed through pipes into the fish pens. The latest technology equipment, including underwater cameras, keeps watch on the salmon and provides a variety of data such as feed allocations and water conditions.

“Stewart Island is a pristine environment and is home to clean water, untouched nature, and beautiful King Salmon which are recognised by the world-renowned Monterey Bay Aquarium as world’s most environmentally sustainable farmed salmon. Controlling our feed output using the latest technology helps us preserve that perfect environment we are so lucky and grateful to be working in,” Ted said.

The 26-metre long steel barge was launched from Hobart in mid-August and towed by an Australian tugboat across the Tasman. With Covid-19 restrictions at the maritime border, Ministry of Health Director-General Dr Ashley Bloomfield personally granted permission for the San Hāmana to enter New Zealand. The barge arrived in Bluff harbour on Sunday 13 September.