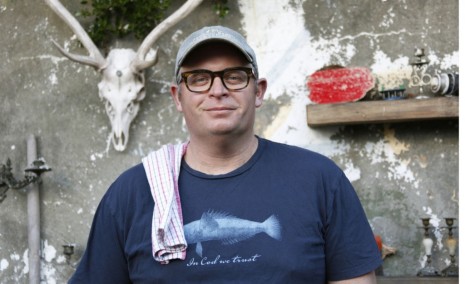 That was until Tsunami Sushi’s Scott Murray dropped by one day with a whole fish from Mt Cook Salmon.

“It was quite extraordinary,” Al said.
“I got a call from Scott one day saying ‘can I drop by and introduce you to this salmon’.
“I was sceptical because I’d always thought salt water salmon was better than fresh.
“But it was a bit of an honour to have him around, he’s a legend around these parts.”

Partly out of intrigue about King Salmon grown in the Mackenzie Country hydro-canals, and partly out of admiration for the caller’s skills, Al welcomed the chance to see Scott’s 30 years of sushi and sashimi experience in action.

“He brought a whole fish around and I started to cut it up and he finished it up. He’s the master and it was really cool to have him there to talk us through it,” Al said.
“The fish itself was absolutely beautiful.
“I love all fish and I’ve eaten a lot of salmon. I think the New Zealand product on the whole is really good.
“I’ve used a lot of product from New Zealand – Akaroa and New Zealand King Salmon have always impressed me.”

And the fresh water product did not disappoint.

“The flavour is really pure and clean,” he said.
“I’ve always associated the colder the water with the finer the taste.
“Which makes sense when you get an understanding of how these fish are bred in the cold, clean water with the strong current.”

“Best salmon I’ve ever eaten…period!” he told the world via the social networking site Twitter.

Al later said it wasn’t just the fish, but the whole experience that Scott created that wowed him.

“That was a fantastic surprise,” Al said.
“To me, you get huge ups from people or producers that do that kind of thing.
“It’s lovely to see the whole form of the fish and then cut it down.
“It makes so much more sense when you see the product, connect with it, and hear the story, see Scott’s prowess and skills”.